To share your memory on the wall of Otto Gildenhaar, sign in using one of the following options:

Provide comfort for the family of Otto Gildenhaar with a meaningful gesture of sympathy.

It is with deep sadness that we announce the passing of Otto Gildenhaar on January 31, 2020 at the age of 88. Otto was affected by heart disease and managed well for many years. What his heart lacked in physical strength was made up for many times over by his heart's capacity for kindness which he gave freely to all whom he encountered. More recently, a compromised heart combined with other medical issues made it more difficult for him to cope. He spent his last days resting peacefully with family at his side.

Otto was born on January 11, 1932 in the village of Domersleben, Germany to parents Hermann and Emma Gildenhaar. His childhood was shaped by tumult and hardships that existed in Germany at that time, and sadly he experienced the passing of both one sibling and his father in his childhood. He learned the trade of a "Möbelschreiner", or furniture maker, and in the German tradition earned his journeyman’s status to complete his apprenticeship. The adventure of new experiences in new places caught his imagination at an early age. Searching a better future, Otto defected from then East Germany in 1950 and landed in Wetzlar, West Germany. There he honed his skills to become a proficient craftsman. With wanderlust still in his blood he later emigrated to Canada in 1958 and made his way to Toronto. Through a welcoming and supportive network of fellow expats, Otto was introduced to his future wife Hilde who was still living in Germany. After two years of long distance courtship via hand written letters, Otto invited Hilde to Toronto. In 1962, Otto and Hilde (née Brück) married and settled their own land in a small rustic log cabin in Purbrook, outside of Bracebridge, Ontario which he purchased for twenty dollars down and the grand sum of five hundred dollars. Otto was never before so proud to stand on a piece of ground that he could call his own. While the original cabin was built circa 1900, Otto restored the shell and hand crafted an entirely new house within by himself. In this, their first home, they brought into the world two sons Mark and Frank. With Hilde's help, Otto's ingenuity and creativity thrived in Purbrook. The old homestead evolved into an oasis in the wilderness as Otto incorporated a workshop, sunroom, flourishing gardens, a pond, chickens, geese and rabbits. In 1975 Otto and Hilde moved to a new modern home in Bracebridge, unsurprisingly, primarily hand build by Otto himself with a larger workshop and larger garden.

In 1991, Otto and Hilde entered their retirement years. He finished his career with Corrections Canada as chief instructor of the industrial carpentry program at Beaver Creek Institute in Gravenhurst, Ontario. They decided to spend their winters in warmer climates than Bracebridge. For 20 years, Otto enjoyed wintering near Port Ritchey, Florida, growing a new lush lawn each year and enjoying euchre nights, singing in a local choir, and bowling. For Otto as a child citrus fruit was a rare commodity. Having his own grapefruit tree in Florida was a humble milestone in his life. Otto was the go-to man for small home projects at the resort as he re-purposed a storage closet into a multi-function portable workshop.

In 2004, Otto and Hilde decided to live closer to family and moved from Bracebridge to a home in Kingston, Ontario. He continued to tinker in his workshop there until he moved to his final residence at Helen Henderson Care Centre in Amherstview in August 2018.

Otto will be remembered for his kindness, compassion and devotion to family and friends as well as his passion for finely crafted woodwork and land stewardship. He was the loving husband of Hilde, married 56 years. May they rest in peace and enjoy eternity together. Otto will be missed lovingly by sons and spouses Mark and Andrea, Frank and Heather, as well as grandchildren Solveig and Naomi. He will also be dearly missed by family in Germany including Günther and Inge, Dieter and Renate, Martha, Marie and Ernst, and many nieces and nephews.

A Remembrance Celebration will be held at the Helen Henderson Care Centre in Amherstview, Ont. on Saturday, February 15, from 2 – 4 pm. Maps and directions to follow. In the event of inclement weather an alternate date will be announced. Please RSVP by phone or email to Mark: 613-389-6696, mgildenhaar@gmail.com

Please leave a message on the associated Memory Wall. We would love to share in your memories of Otto. Cards and flowers are welcomed. For those from away, please visit the Heartfelt Sympathies Store link for additional information.
Read Less

Provide comfort for the family by sending flowers

We encourage you to share your most beloved memories of Otto here, so that the family and other loved ones can always see it. You can upload cherished photographs, or share your favorite stories, and can even comment on those shared by others.

Christina and Erhard sent flowers to the family of Otto Gildenhaar.
Show you care by sending flowers

Posted Feb 14, 2020 at 09:26pm
I got the pleasure spent time 2 times in Canada 2004 and 2017 with together with Otto, also in 2008 in Erda, Germany, when Hilde got his 80th birthday.He was always in a good mood and did all the things with such a relaxed power. It was unbelievable to see, how he cares about his beloved wife Hilde every day at Helen Henderson during my visit in 2017. He will have an eternal place in my heart and soul as the “lovely, friendly and humorous Onkel Otto“.
Rest in peace, Otto.
Comment Share
Share via:
JL

Posted Feb 13, 2020 at 03:22am
Otto was such a good friend and contributor to our families life and well being. He always had a friendly way and made lour lives happier and meaningful in so many ways. We enjoyed just hanging out with him at family occasions. We also profited from his skills as a creative builder and still enjoy the improvements he made to our cottage such as the super beautiful kitchen cabinets which perfectly match the rustic decor. How can we thank you enough for the genuine contributions to the lives of our eight grandchildren and other friends as well. Joel & Marlene Loken, parents of Andrea.
Comment Share
Share via:
CE

Christina and Erhard purchased flowers and planted a memorial tree for the family of Otto Gildenhaar. Send Flowers

Posted Feb 10, 2020 at 03:03pm
Clem and I came to be good friends with Otto and Hilde when we all lived in Bracebridge. Clem met Otto when they were both working at Beaver Creek correctional institute. We visited them many times at their beautiful house which was not far from where we lived in Bracebridge.
I remember on one occasion when Otto brought his rototiller over and did my garden. I was not the do it with a shovel anymore. Otto was very thoughtful and always willing to lend a hand. Otto we miss you. Love Anny and Clem
Comment Share
Share via: 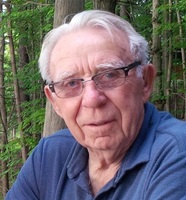 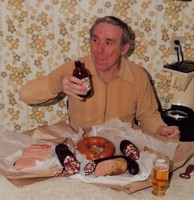