To share your memory on the wall of Jack (John) Armstrong , sign in using one of the following options:

Provide comfort for the family of Jack (John) Armstrong with a meaningful gesture of sympathy.

It is with broken hearts that we announce the passing of Jack Armstrong on Thursday, January 23, 2020. Jack passed peacefully at home in Kingston surrounded by h... Read More
ARMSTRONG, Jack (John) William Gordon
1938-2020

It is with broken hearts that we announce the passing of Jack Armstrong on Thursday, January 23, 2020. Jack passed peacefully at home in Kingston surrounded by his loved ones after a brief and bitter battle with pancreatic cancer. The oldest son of Earl and Peninnah Armstrong, Jack and his brothers, Bob (Anja) and Richard (Donna), were born and raised on the family farm in Manotick, which Jack always lovingly referred to as “the garden of Eden”. Jack and his beloved Irma (nee Waddell) married in 1959 and together welcomed and raised their treasured daughters, Sherri and Kelly. Irma’s passing from cancer in 1994 was devastating for Jack and the girls. At the age of 28, Jack was appointed a Land Registrar, the youngest one ever at the time, and enjoyed a long and successful career in the Land Registry Division until his retirement in 1993. Jack was happy in both his personal and professional life and was well loved by his family (both the Armstrongs and the Waddells) as well as by numerous friends, many of whom were lifelong. Jack was fortunate enough to find a second love and he and his dearest Anita (nee Frankle) enjoyed 24 happy years together, travelling far and wide and living life as only they could. Jack was one of “the good guys”. Everyone’s friend, always optimistic and smiling and ready to help and seldom seen without a Tim Horton’s coffee in his hand. Jack was a devoted husband, father and grandfather and a loyal and faithful friend. Jack is survived by his devoted wife Anita, his loving daughters Sherri (Kevin), Kelly and his cherished grandchildren, Samantha, Jayke and Jamie-Lynn. At Jack’s request cremation has taken place and a private interment of his ashes beside his beloved Irma will take place at a later date. A celebration of Jack’s life will be held on Saturday, April 18 from 1:00 to 5:00 pm at The Harbour Restaurant (53 Yonge Street) in Kingston. Please bring your stories to share. In lieu of memorial donations Jack would want you to buy someone a Tim’s coffee and most of all, be kind.
Read Less

Provide comfort for the family by sending flowers

We encourage you to share your most beloved memories of Jack (John) here, so that the family and other loved ones can always see it. You can upload cherished photographs, or share your favorite stories, and can even comment on those shared by others.

So sad to hear of Jack's passing. We have the best of memories of the "Manotick days" - he was so helpful to Ken during his years at the registry office, and we had so many great times curling - laughs upon laughs. You have lost a true prince of a guy, and our condolences to Anita and the whole family.
Ken and Cathy Cramer, Ottawa

Posted Feb 02, 2020 at 08:30pm
Truly God sent us Jack the moment we met him on a cruise.. He was the happiest, kindest guy ever. He would do anything for you. He was the best friend ever and I was honored and I knew that he considered me a wonderful friend to him. To Know Jack was to love simple as that you couldnt help but love Jack. Know that I loved you Jack. God bless you God keep you in his arms and now dance with the angels Jack. Eleanor
Comment Share
Share via:
BT

Posted Feb 01, 2020 at 12:37pm
I will always remember the stories and the laughter from our days playing softball in Manotick. We had a close group that socialized frequently and the glue that held us together was most often supplied by the shananigans of Jack and usually from the genuine comradery of teammates such as Jack Crawford, Sel Black, Jack McDiarmid, Bliss Buchanon, Dave Bracken, Frank Sherman, Gary Boxma, Bob Carse and Vince Daly. Jack was a great guy, a good friend and will be sorely missed by all who knew him.
My heartfelt condolences to Anita, Sherri, Kelly and of course Bob and Anja 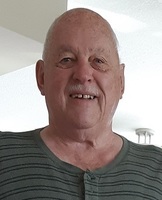